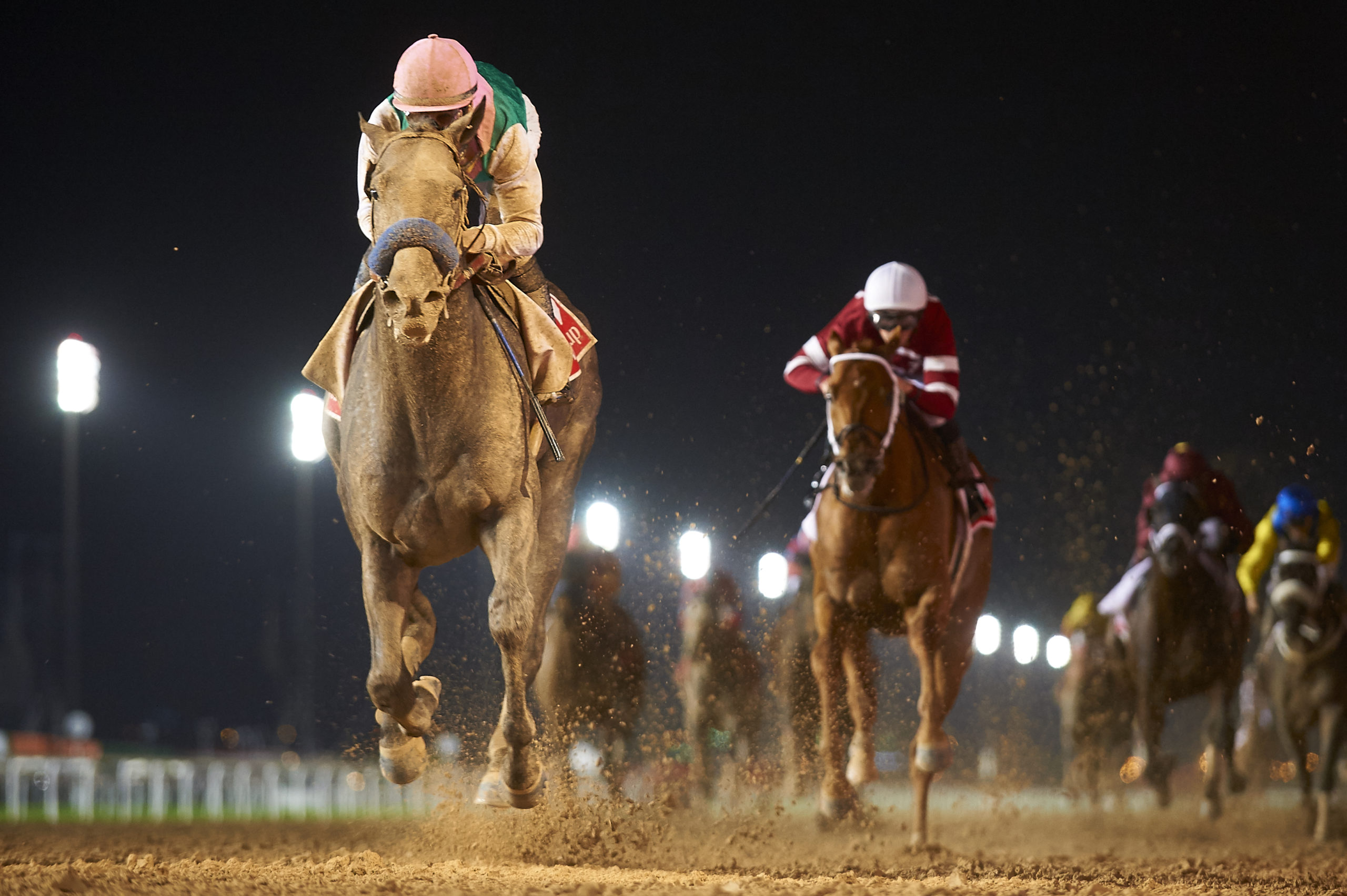 If there were any remaining doubts about his greatness, Arrogate shot them down and cemented his still-youthful legacy on a rain-soaked track 8,015 miles from home by breaking last but finishing first in the $10 million Dubai World Cup Saturday at Meydan.

The dark grey son of Unbridled’s Song (Bubbler, Distorted Humor) broke dead last on a track officially listed as “muddy” following two days of heavy rain. Falling as many as 12 lengths off the lead, it looked to be Gun Runner seizing the unusual conditions to gain what would have been a staggering upset. But jockey Mike Smith defied a slow start and ferocious kickback and took a page from his days of riding champion mare Zenyatta from last to first, gathering the long-striding colt to take the lead coming out of the final turn. The big roan with the bigger engine began pulling away from a loaded field of 14 as the crowd’s surprised silence turned into cheers urging Arrogate on to a 2 1/4-lengths victory over Gun Runner with Neolithic third another five lengths back in a 1-2-3 American finish.

“When he missed the break, I was thinking ‘Maybe I shouldn’t have brought him, maybe he’s getting tired,'” mused trainer Bob Baffert about his new star, reigning Longines Best Horse and the highest rated horse ever to run in Dubai. “In the far turn when he started making a little move, I got a little hope. When they turned for home, I told my wife if he wins this race, he is the most incredible horse I’ve ever seen. I think we saw him stamp his legacy today.”

“When he started like that and got squeezed (by Keen Ice and Furia Cruzada),” explained Smith, “I had no choice but to sit there and let him collect himself. It used to take the great mare Zenyatta time to get going and, like her, I had so much confidence in him. When I called on him heading for home, he just took off. I won the Breeders’ Cup Classic on Zenyatta and people say that was the greatest race. I think this race has topped it.”

An emotional Baffert, who won two previous Dubai World Cup races with Silver Charm in 1998 and Captain Steve in 2001, likened Arrogate’s win to a Hollywood script.

“It was very emotional for me,” said Baffert, clearly grasping for words to describe disappointment turned to joy. “We came all this way, how could he break so poorly? I heard the whole crowd heave a sigh. Even the announcer said: ‘He’s dead last.’ Dead last! I said to myself there was no chance he can win. This is not Hollywood, this is not a script where he comes running at the end. But when he turned for home and started gobbling up the ground with that long stride of his, I was just like everybody else. I thought where did this horse come from? But today…if anybody wasn’t super-impressed by that, they just don’t like horse racing. I still can’t believe he won that race.”

Garrett O’Rourke, representing Juddmonte Farms and owner Prince Khalid Abdullah of Saudi Arabia, explained why connections ultimately made a late choice to come to Dubai after initially deciding he should race only in the U.S. “It’s like having a great athlete. When they have an opportunity to flaunt their stuff, you’ve got to take it, and this was that opportunity.”

Among horsemen, it is close to profane to compare any horse with Secretariat. But after this awe-inspiring performance, several were heard to do just that, including Baffert. Arrogate’s come-from-way-behind victory was just the cherry on a Saturday sundae filled with great competitors and close finishes.

In the opening $1 million Group 2 Godolphin Mile, Second Summer overtook leader Sharp Azteca in the deep stretch and held on by a neck over German invader Ross. Sharp Azteca faded to a 3/4-length third.

Winning trainer Doug Watson earned the win in this race for a second consecutive year. He saddled the 1-2-3 horses in last year’s edition of the race (Oned Man Band, Faulkner, Cool Cowboy). Watson said he had “‘never run a horse in a track so wet before” in his 22 seasons in Dubai after the dirt race track had been pelted by heavy rain Friday through Saturday morning and officially listed as “muddy”. The race was marred by the breakdown of Irish runner Stormadal. Dutch rider Adrie de Vries escaped injury.

In the 1 1/4-mile purebred Arabian Kayhala Classic, moved to second position on the Dubai World Cup day card, Reda overcame a slow start under jockey Harry Bentley and eventually headed RB Burn to gain a 2-1/2 length $1 million victory with Sniper De Monlau three lengths further back in third. “The kickback was difficult to overcome” Bentley asserted, “but I had plenty of horse at the end.” It was the third Kayhala Classic win for trainer Julian Smart.

Vaziribad was a repeat winner by a neck over Beautiful Romance with Christophe Soumillon aboard in the $1 million two-mile turf Dubai Gold Cup. Sheikhzayedroad motored into third 1 1/2 lengths behind. “He’s a horse we learn from every day,” said trainer Alain De Royer-Dupre. “He’s a very special horse. I’m training the best. His next race could be the Gold Cup at Royal Ascot.”

Thunder Snow thundered home before the hometown Godolphin fans the winner by a short head over Epicharis in the $2 million 1900 meter Group 2 UAE Derby with Master Plan able to only master third by a length and a half. It was the second consecutive win on the evening for jockey Soumillon in a race that often has significance for American Triple Crown races. The two past winners of this race enjoyed later success in the U.S. with year’s winner Lani participating in all three Triple Crown events, the Kentucky Derby, the Preakness and the Belmont Stakes, finishing 9-5-3. The 2015 winner Mubtaahij finished eighth in that year’s Kentucky Derby, the best finish to date for a winner of the UAE Derby. Connections of Thunder Snow indicated the 3 year-old son of Helmet will likely return to the U.S. for a rest before shipping East in possible preparation for the Belmont Stakes or the New York summer racing season.

The Right Man was just that in the 6 furlong turf Al Quoz Sprint, part of this year’s Global Sprint Challenge. Long On Value came up short by a nose with last year’s winner Ertijaal managing only a third place finish 1 1/4 lengths in arrears.

Mind Your Biscuits gravied Comicas by three lengths over a short 6 furlongs for a long $2 million in the Group 1 Golden Shaheen. Morawij was a short head off and St. Joe’s Bay a half-length back. Trainer Chad Summers was remarkably cool after earning his first Group 1 win. “We came into this race really confident,” he reasoned. “He’s an athlete and we thought he was the best in this field.” He was. Local fan favorite Reynaldothewizard had only enough magic to finish eighth under Richard Mullen.

The grass was rainsoaked and the track yielding, but Japan’s Vivlos would not yield to Irish runner Ribchester who took an early lead. Fellow Irish countryman Hashem took the lead in the final 100 meters, but was headed by Vivlos in the final 50 meters holding on to win by a half length with Ribchester third by the same margin.

All the pre-race hype in the $6 million Group 1 2410 meters (12 furlongs) turf Sheema was an expected match race between Irish stars Highland Reel and Postponed, but that match was postponed when William Buick guided Great Britain’s Jack Hobbs to a surprising 2 1/4-lengths win over Seventh Heaven.

Postponed finished a disappointing third by 1 3/4 lengths. Highland Reel took an early lead but lost it 400 meters from the finish and was passed by the entire field, relegated to a head-scratching dead-last finish. Trainer Aidan O’Brien’s charge seemed unable to get good footing on the rain-slicked green.

The Dubai World Cup has produced some memorable racing moments. But Saturday night, Arrogate, jockey Mike Smith and trainer Bob Baffert produced one that may be incomparable.