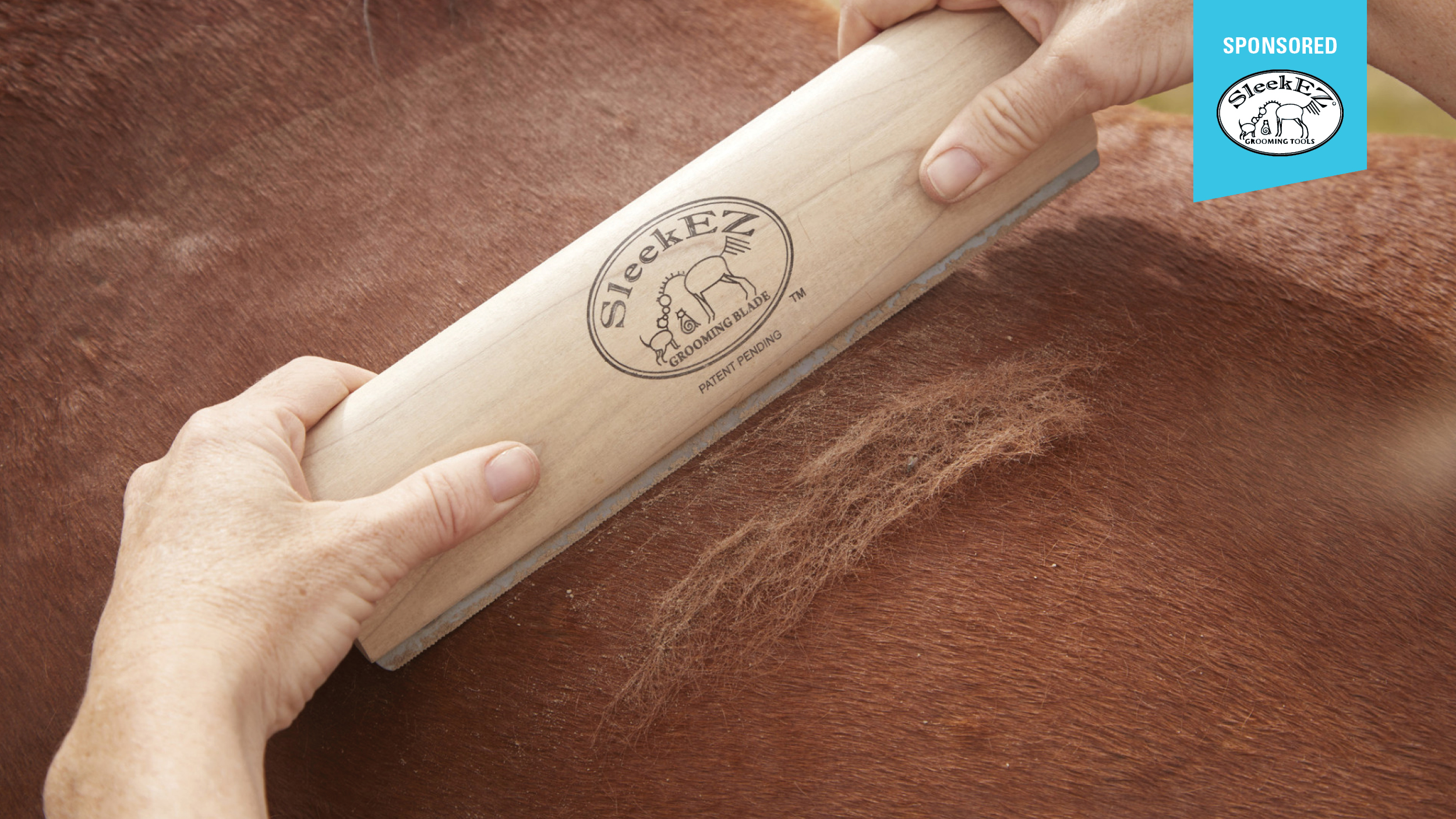 Everyone knows the rules when it comes to grooming during spring shedding season. Don’t wear polar fleece of any kind. Get ready to spend LOTS of quality time with your curry comb. And start mentally preparing yourself to go home and discover clumps of hair in places you’d never expect.

California horse dentist Jennifer Tipton knew the rules for spring shedding well. But her up front and personal face time inspired her to change the rules. She had an idea. Could this be easier? She decided to find out.

“I love grooming. My animals always look super nice,” says Tipton. “I had ideas for making things but never really went for it. I’d see others embrace an idea and create something, and think, huh, why didn’t I do that?”

When she decided to act, Tipton created SleekEZ in 2010: a shedding blade with a patented tooth pattern and comfortable, easy-to-grip wooden handle. It’s small and it’s simple. But as anyone who tries it will tell you, SleekEZ is a spring shedding game-changer.

Tipton describes equine dentistry as a field best suited to your 20’s and 30’s.“I told myself I wouldn’t do horse dentistry after 40,” Tipton says, noting that it’s a profession that’s hard on the body. At 42 , she made the change. In 2009, she packed up her dentistry practice in TKCITY, California, and returned home to her father’s house in TKCITY, Oregon. There, with memories of floating teeth in the springtime still fresh in her mind —horse hair flying up her nose and in her mouth while she worked—Tipton embraced her idea for a new type of grooming tool. One that would help along the shedding process, but that would still be delicate on the horse’s skin while not destroying the coat.

There are more than 100 different patented tooth patterns for metal blades of all sorts, and Jennifer Tipton tried out many of them. “Some of them cut the hair, or break the hair off,” she says, “some grab or pull the hair too much.” The inventor was looking for that perfect pattern and design, and she found it on a refurbished a hacksaw blade—a blade that was about to become her SleekEZ grooming tool. To fashion the tool’s handle, Tipton selected an Oregon staple: Douglas Fir, one of the tallest trees in the world with wood that’s both sturdy and readily available. But although her SleekEZ prototype was finally beginning to take shape, Tipton says she was still a long way from putting the shedding tool on the market.

It took TK# blade prototypes and plenty of trial runs before Tipton was finally satisfied that her SleekEZ was the SleekEZ. Far from the hacksaw blade she’d first adapted, the final design featured a graduated, repetitive tooth pattern that maintained the integrity of the coat while being gentle enough to use even on sensitive animals. Tipton says the first indication that she was onto something big came from “reviews” from her own horses. “They just loved this blade, they’d really lean into it,” she says.

When confident enough to take her invention to market, she needed a manufacturing partner. Tipton had once worked as an executive assistant for various film studios in Los Angeles and knew a handful of set designers who made props for movies. With a hand from Hollywood, she soon had a prototype.

From Tinseltown to Your Grooming Tote

The first batch of SleekEZ grooming tools was made at Universal Studios in Los Angeles in 2010. Tipton now had boxes of the things, but she needed to sell them. Her big break came that same year when one of her (DENTAL CLIENTS? OR SLEEKEZ CLIENTS?) clients, Cathy Trope – the woman behind the former Fugly Horse of the Day blog – offered to add a SleekEZ link to her blog. Within a few hours of posting it, the first order popped up in Tipton’s inbox.

“I was completely confused. I’d set up [the webpage], but hadn’t had any orders.” Two more requests arrived that day. Soon, the slow trickle in her inbox became a massive gush. Tipton went from wondering if she’d have any customers to wondering if she’d have enough product to fill the orders. “It was like running through the woods with a bear chasing me,” she says of April 2015, when she had more than $500,000 in sales in one month. During this rush, Tipton averaged about two hours of sleep per night.

[WHERE THESE WHOLESALE AND RETAIL SALES? THAT’S MORE THAN 25,000 SLEEK EZs in 30 DAYS. HOW DID SHE PROCESS ALL OF THOSE SHIPMENTS?]

One year later, the first-time inventor has distributors around the world, including in the U.K., Norway, New Zealand, and even Lebanon. “The SleekEZ has traveled farther than I have!” Tipton says. Success is sweet, but just the beginning she hopes of more innovation she can bring to the equestrian space.

“Ever since I was a kid, I get swept up in these feelings of extreme joy, and that’s what it was like with the SleekEZ. I’ve always been ambitious. I’ve always seen that for myself. It’s not about money. We’re here on earth for a short time and I want to do something big with my life,” she says. “SleekEZ isn’t the end, it’s just another stepping stone to do something bigger.”

Get Social! Connect with SleekEZ: