Though King’s Bays Be But Little, They Are Fierce

Home > Blog > Show Jumping > Though King’s Bays Be But Little, They Are Fierce 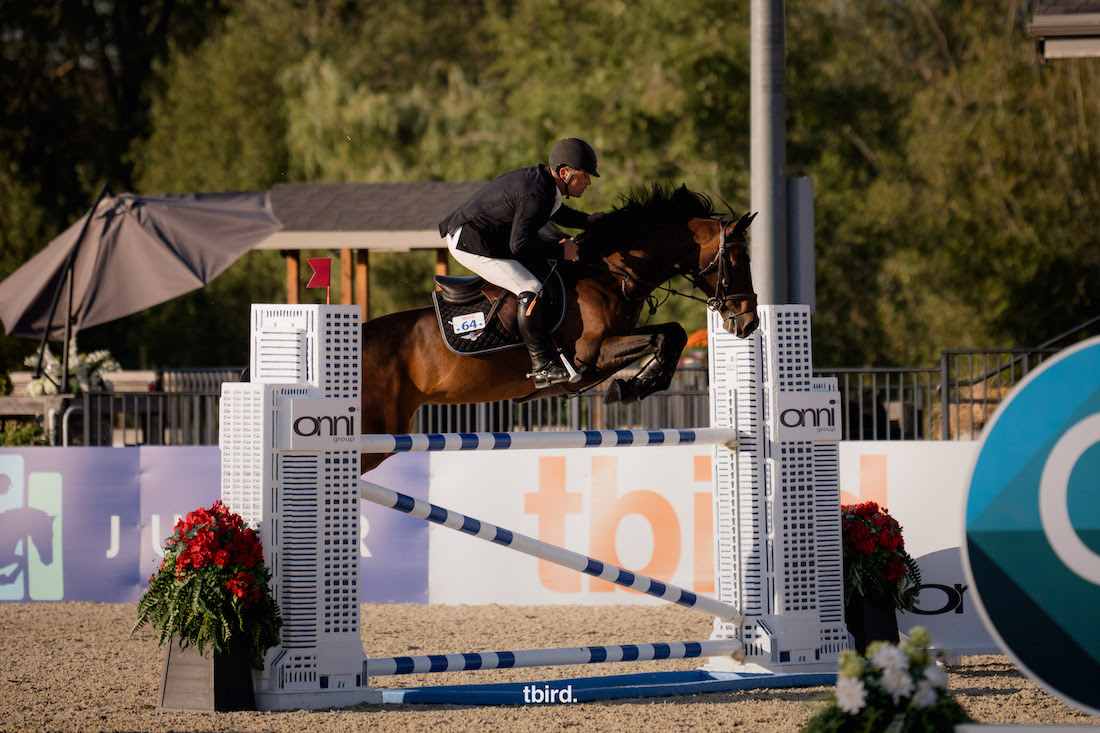 The original quote “though she be but little, she is fierce!” is from Shakespeare’s A Midsummer Night’s Dream. For Kyle King (USA) it was more like a BCHJA Fall Finale daydream at Thunderbird Show Park (tbird).

The horses King has been developing this season have a few things in common. SIG Chiari, Odysseus and Ittolo are all bays under 16 hands, and they’re shaping up to be his future top string.

“[All three] are little plain bays and under 16 hands. They’re the opposite of my other string [Enzo, Etalon and Coffee to Go]. This [group] is modern [and] faster…Next year, I think these horses are going to be my main string coming up. It’s nice to have some light, modern types of horses. All three are very similar,” said King.

Recent results suggest he has every reason to be optimistic.

Wednesday’s CSI3* tbird 1.40m kicked off the BCHJA Fall Final, the last international show of the year at the iconic Langley venue. *tear* The chill in the air is bittersweet because while the summer season is over, it also means it’s time for horses to move up.

Starting with nine-year-old gelding Ittolo, who according to JUMPR App has only jumped four international 1.40m tracks in his career to date. Yet when Ittolo tested the Peter Holmes’ (CAN) speed track he handled it like a seasoned competitor, securing the lead with an over-two-second buffer.

“I got [Ittolo] two winters ago. Last year, I rode him in this same class, and he got a ribbon. We moved up really fast—maybe too fast. He’s bold and brave, but the ride-ability wasn’t really there,” said King.

Moving a horse up isn’t often a direct ascent through the levels, but more like a process. Sometimes, all stepping into a bigger class does is help a rider gauge which challenges the horse is ready for and what still needs to be refined. So, the horse will continue jumping a comfortable level until all of the training concepts come together. When King rode the class with Ittolo again on Wednesday, he had the confidence and ride-ability that he needed.

“There was a line on the outside of the course that was riding a steady six, which slowed everyone down. I watched, and I rode [the line] on my other two, and I thought if I had a good oxer [into the line], I could leave one out. I knew he would be able to pull it off,” said King.

Following him was 11-year-old Gamble with Irishman James Chawke in the irons who crossed the timers in 58.55. Gamble and Chawke also came second a few weeks prior in the CSI3* Winning Round 1.45 at tbird. Stable parter Conor Swail (IRL) rounded out the podium with Nadal Hero & DB with 58.71 seconds, just shy of Chawke’s time.

So amongst the 33 horse field you could call Ittolo the underdog if he wasn’t already nicknamed “Honey Badger” by King’s barn.

“[He is] a character, full of happy, excitable energy and he usually gets his way. It’s made him a barn favorite, and after tbird, he’ll likely travel to Thermal, CA for the winter season in California. He’s a super talented horse,” said King.