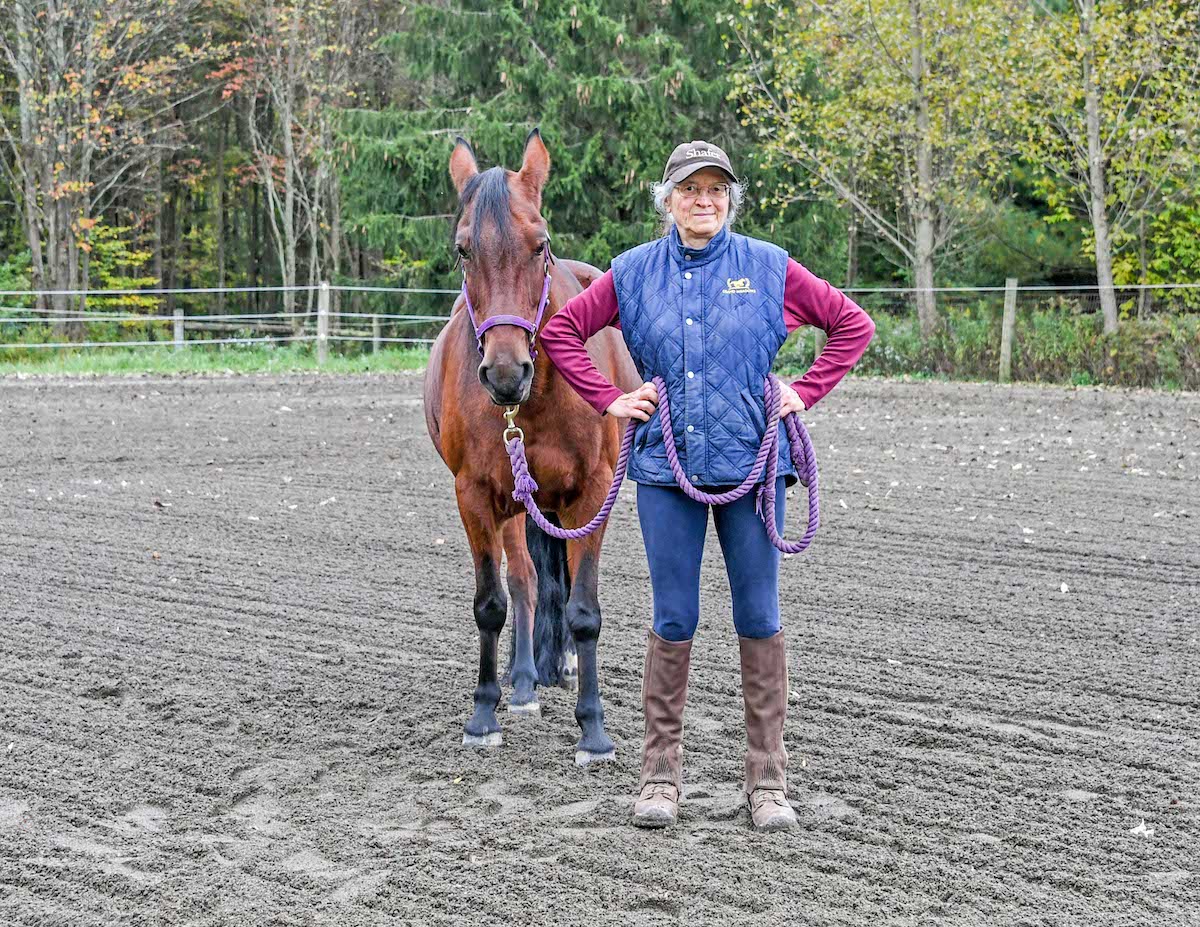 Who hasn’t had a horse who’s always “in your pocket”? The one who pushes and rubs and walks super close? We tend to either love on this horse because his affection and attention is “cute,” or we get annoyed and impatient, and so spend our time constantly correcting him. In her book What Horses Really Want, horsewoman Lynn Acton explains that unsafe behaviors related to personal space often have little to do with bad behavior and more to do with the horse’s need to feel safe and protected—and the “protector” he wants is you. There’s a way to offer him what he needs while still establishing reasonable boundaries.

Brandy was a dark bay mare built more like a small horse than a large pony.

Found wandering loose in upstate New York where we are not supposed to have free-roaming horses, she was so feral it had taken months to lure her into a pasture so she could be herded into a trailer for transport to a rescue farm. It was many more months before she could be touched.

Scars showed she’d had serious wounds. Her eyes, though now healthy, showed signs of an untreated infection. Her udder indicated she’d had a foal. All this happened before she was captured at the age, according to her teeth, of three. She had spent 30 days with a professional trainer and returned more fearful than ever. At age six, her adoption prospects hovered around zero.

When Brandy came to me, she had several unsafe behaviors related to personal space. One occurred when we went through a gate and turned around to close it. Brandy wanted to lift her chin and swing her head above mine as she turned. I did not want her crowding that close, and I especially did not want her flinging her head over mine. To change this, I used the tactic of making the behavior I wanted more attractive than the one I did not want. Every time we turned and Brandy started to lift her chin, I just happened to stretch my free arm straight up in the air so that as she swung her head over mine, she bumped her face into my arm. I did not look at her or say anything when I did it. I was not punishing (hitting) her; she was bumping herself on my arm. This is a critical distinction, and horses get it.

She quickly decided to back up so she had room to turn around without whacking her nose on my arm. This corrected the unsafe behavior quickly and without jeopardizing the trust I’d earned.

Our other personal space issue was a bit more complicated. When Brandy hovered close out of interest in what I was doing, I chose to allow it, though other people might not, especially with a larger horse. When she crowded because she was anxious, that was a different story. There was nothing belligerent or disrespectful about it. She was looking to me for reassurance, like a foal makes body contact with her mother when she’s worried. But it was still dangerous.

Sadly, most people don’t recognize this action for the compliment that it is. Instead of trying to escape, the anxious horse is looking to you for protection and reassurance. This is what Protector Leadership is all about! Your big chance to say, “Yes, I’m here to protect you!”

What do most people do instead? The opposite! They push, poke, chase, slap, scold, yank the lead, or anything else unpleasant to “back the horse off,” which only makes the horse more frightened and desperate for reassurance. The horse, who meant no disrespect, has no way of knowing what he is being punished for or what the handler wants him to do instead.

The simple, speedy solution that makes everyone safe and happy is to show the horse in a non-punitive way where we do want her to be. Without looking at Brandy or speaking to her, I flapped my elbows as if overcome by an urge to do a “chicken wing” exercise. When she stepped out of my space, I praised her as if it had been her own excellent idea and put a reassuring hand on her withers, the mutual grooming spot. Then we just stood. If she stood quietly, which she usually did, I rewarded her by easing closer to her so our bodies touched, which was what she wanted in the first place.

If a horse is too tall for elbows to be effective, you can use a raised-arm exercise like windshield wipers that involves motion inside your personal space bubble. It simply has to be a consistent neutral motion that is not directed at the horse. Horses are good at judging distance. As long as your maneuver stays right inside your personal space, they figure out exactly how far away it is comfortable to stand, and they get it more quickly than you could teach them.

This excerpt from What Horses Really Want by Lynn Acton is reprinted with permission from Trafalgar Square Books (www.HorseandRiderBooks.com).