Home > Blog > Horse Care > Trailering Can Be a Workout for the Horse, Study Finds 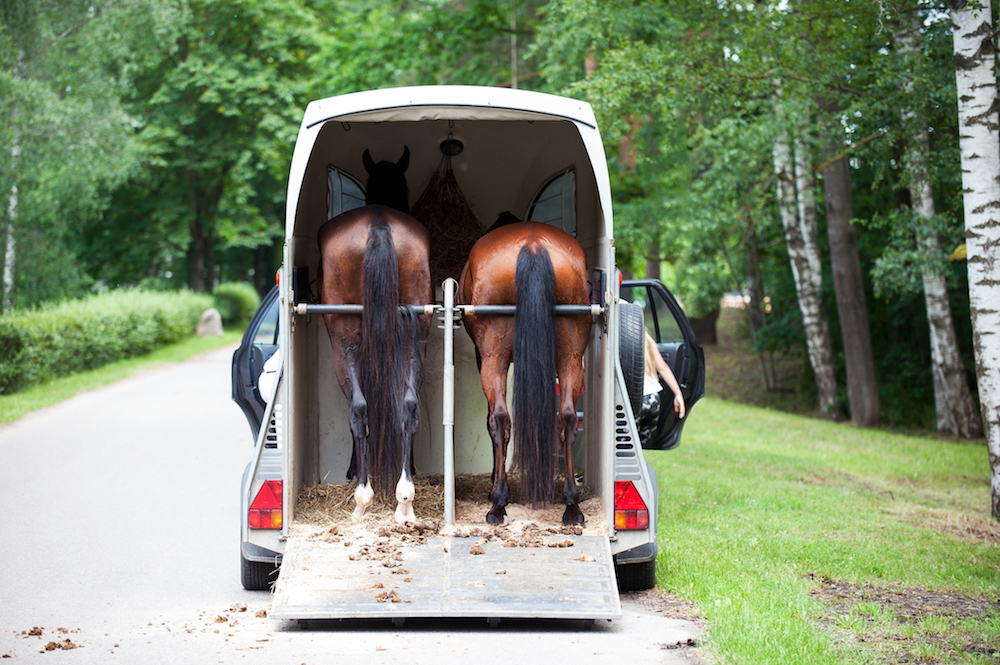 Researchers used a special horse trailer to study how horses move when they travel. They demonstrated that horses move frequently during travel to compensate for the movements of the trailer, and that a horse’s legs play an important role for dampening the vibrations from the road.

Relatively little is known about how horses respond to their time spent in transit.

Anxiety while travelling has been reported in some horses, and issues with hydration, ventilation, and body temperature regulation are recognized. Some evidence exists to suggest horses prefer to stand in certain orientations when travelling (e.g. facing backward versus forward versus slanted), however, the preferred orientation is likely individual to each horse.

The impact that trailering has on a horse’s ability to maintain its’ balance while standing has been under-studied.

Consider how difficult it can be for us as humans to stand on a moving train or bus—especially during sudden deceleration. Humans use sensory systems such as vision, the vestibular system (that provides information about body orientation and movement), and somatosensory system (e.g. sense of touch, pressure, movement, vibration, etc) to inform us about where our bodies are in the world. We then process this information, typically subconsciously, and our sensory system works in concert with our muscles to ensure we stay upright on even the bumpiest of bus routes.

Horses use similar strategies to maintain their own balance in trailers, and given their large size and the challenges associated with controlling that mass, it is interesting to consider how much horses need to move their bodies when on the road to avoid falling and how much energy this requires.

Thus, researchers from Massey University in New Zealand sought to examine how horses move while trailering. The team outfitted a commercially available two-horse trailer with a floor that was instrumented with force plates. This hardware allowed researchers to precisely measure how a horse’s body moves in response to the acceleration, braking, turning, and constant speeds experienced during a typical trip.

Two horses were loaded into the trailer and taken on a 56 km trip that took 58 minutes to complete. The route covered both country and city roads.

Despite these large values, the vertical movement was still less than the amount of vertical movement measured in the trailer’s floor, indicating that the horses used their legs to dampen the vibrations to a degree.

If a horse’s legs were very stiff then the horse’s body would move a lot in the vertical direction during travel—exactly the same amount as a trailer moves up and down cross the road. However, a horse’s legs function as springs to dampen the movement so the body can stay more stable, which takes energy to accomplish. A very bumpy road would require a lot of effort from the horse’s body to navigate in order to maintain a stable position—and over an extended period the horse could become too fatigued to accomplish this correctly. It is also likely that horses that travel often are more practiced at countering the moves of a trailer, resulting in increased stability as well as using less energy.

Of course, when we stand in a moving vehicle our bodies don’t just move up and down, but we also sway from side to side as well as forwards and backward (i.e. horizontal movement). Think back to the last time you stood on a bus and the driver had to brake quickly and your body shot forward until you either took a step or flexed your leg muscles to move your body back to a neutral location.

Importantly, these movements have an energy cost associated with them. For horses to activate their muscles to counteract the movements of the horse trailer requires energy—an erratic trailer ride can quickly become a workout. Also, it is likely that horses that are less fit and infrequently spend time in a trailer will struggle more with travel than horses that are experienced travellers.