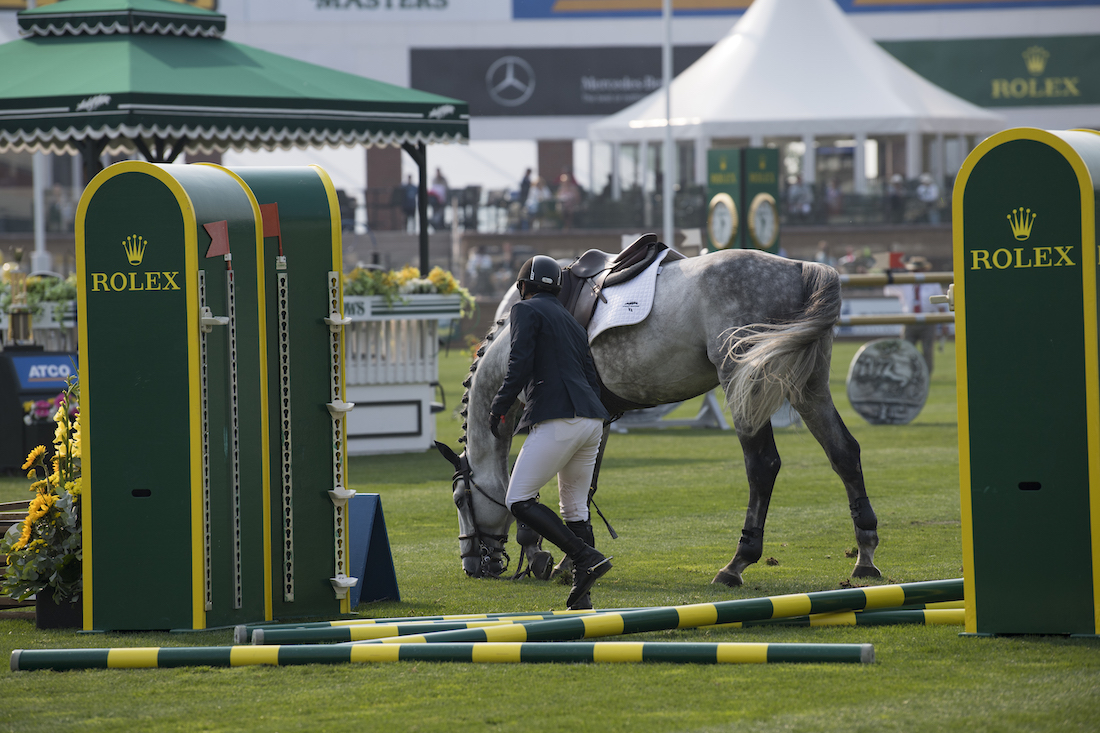 Have you ever had one of those days where you felt like a shit rider because you fell off or were eliminated?

Then, in an attempt to forget your shortcomings, you turn to social media only to see pictures of people and their horses in matchy matchy outfits looking perfect. Or you read someone’s post about how amazing the show was, which, of course, makes you feel worse than when you had the wind knocked out of you 30 minutes earlier.

If you ride horses you’ve felt this way and I’m here to tell you, you are not alone. Over 240,000 people follow the Shit Eventers Unite (SEU) Facebook group that celebrates our inept moments, the moments that leave us questioning whether we should continue riding or contemplate crochet.

Cressida Kitchin-Townshend, a self-effacing horsewoman from the U.K., started SEU in 2019 after everything in her life was turned upside down. Her husband left her for another woman. Her event season floundered and ended with her breaking an ankle.

“I tried to carry on [eventing] but just couldn’t. My heart wasn’t in it anymore,” Cressida said. “SEU came out of the shittyness of that.”

At the time Cressida had had enough of the ever-irksome social media posts that sound just a little too positive after a long day of showing.

“There is a pressure on Facebook to be successful,” Cressida said. “I know the disappointment. If it was bad, why feel you need to make-out it was good? I think this is why people like [SEU]. You have to laugh at these things otherwise we would all go mad.”

SEU’s popularity grew quickly after the first year, exploding from 10,000 to over 200,000 in four months. Falls and bizarre mishaps take center stage from far more than just event riders. Almost every discipline has had its moment to shine on the page, from barrel racing to driving and everything in between.

“Once we get the dressage riders, we will know we’ve made it,” Cressida said with a laugh.

“It has grown fast, maybe partly due to the lockdowns and enforced misery,” Cressida said.

Every day Cressida and her three friends who are helping as admins receive hundreds of post submissions—approximately only 15 percent make the cut.

“I’m the most Simon Cowell out of the admins,” Cressida admits. “We’ve had some nasty ones. We’ve had people where you can hear the bones break; the rider’s, not the horse’s. We’ve had rotationals or excessive napping or broncing. We’re not here to laugh at horses in distress or horses in pain. It’s more about silly falls.”

SEU is a community of like-minded people laughing and sharing all that can go wrong when working with horses. It’s important to Cressida and her team to make sure people feel safe to share their mistakes and remove any negative comments.

“If people were allowed to criticize, it would be a minefield,” Cressida said. “People aren’t sharing their best moments, they are sharing their failures, so it isn’t appropriate for people to criticize. It’s not the nature of it.”

Cressida receives a lot of positive feedback from members thanking her for creating the group because now they know they aren’t the only rubbish riders out there. Cressida never expected that SEU could give others such a boost.

“It’s brilliant, especially that it came out of the worst two years of my life,” said Cressida.

Each month SEU holds a contest where the most ridiculous picture is used for page’s cover photo and it’s aptly named Bugger There Goes My Jeep Sponsorship, because we aren’t all William Fox-Pitt. The name and now popular hashtag came about early on in the life of SEU as a way for Cressida to get more people to post their pictures of why they aren’t sponsored. It’s a poke social media posts where people angle for sponsorship by tagging all sorts of businesses, you know, just in the off chance.

Though not technically a competition, Cressida posts her favorite picture of the day on the SEU Instagram page.

“I think these things do have a shelf life,” Cressida said, “People might get bored of it, but while it’s popular that’s brilliant. The bigger the better.”

One of Cressida’s goals for 2021 is to do some fundraising.

“We’ve got that many members I think we can be quite useful, that would be really nice.”

Other plans include affiliating with horse shows and sponsoring a jump or classes.

There are also plans to add more merchandise to the “Shit Shop,” as she calls it, where at present you can buy branded saddle pads, hoodies, toques, and shirts. New additions will include calendars, bumper stickers and perhaps even an SEU book. When the world enters a COVID-controlled existence, the idea for having an SEU meet-up may well be in the cards.

Shit Eventers Unite is a platform where we can share and laugh at our calamities that occur far too often when living a life with horses.

As a final parting Cressida would like to say, “Thank you, everyone, for being positive and honest and for taking on the ethos of the group. Long may it live.”