Home > Blog > Books and Film > What That Whinny Means 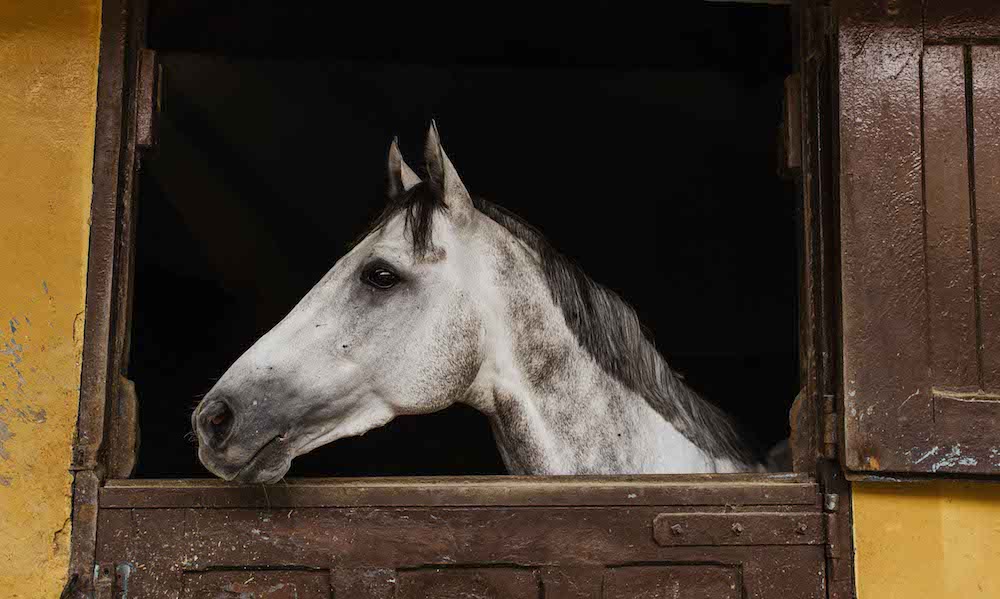 We all get excited when our horses whinny our way.

The very idea that it demonstrates affection, or anticipation of our arrival, or is even merely a polite greeting between friends, is gratifying. After all, we want closeness with our equine partners and a sense of connection, both of which can be difficult to discern without a common language. How and what the horse hears is part of the equation when it comes to translating the sounds he emits.

In the book Horse Brain, Human Brain, brain scientist and horse trainer Janet Jones explores this sense, among others, in order to help us better understand what that whinny might mean.

Horses have powerful pitch perception, but why? Why does a horse need to analyze sound frequencies across a 10-octave range? The rustling grasses of a predator’s approach don’t vary by that much. The answer lies in the horse’s position as a social animal. To survive, he must be able to hear and interpret the vocalizations of herd mates.

Horses communicate with each other all the time. Much of this communication is hidden from humans—not because our four-legged friends are keeping secrets, but because most of us don’t notice the subtle ways that animals reach out to each other. And when we do notice a movement or vocalization, we often fail to understand what it means.

Let’s reflect on a simple whinny. It averages 1.5 seconds in length and can be heard half a mile away. It’s produced in three phases—a high-frequency introduction, a rhythmic collection of medium frequencies in the middle, and a lower-frequency waffle near the end. Many of these frequencies sound simultaneously, like a musical chord, but some waver in and out. Minute variations in these parameters convey meaning to the equine brain.

Compared to neutral, a fearful whinny is higher in fundamental pitch, and the highest frequencies within it are produced at stronger intensities. A greeting whinny is much lower in pitch, and there is greater range and more time in the wavering or vibrato between tones. A separation whinny cuts off early in the ending phase. And so on, through the whinnies that mean, “Good to see you,” “Why won’t that mare come over here?” “Feed me now,” or “Help, the barn’s on fire!” Horses might produce 10 million variations of whinny, and each variation will have different physical characteristics from the next.

The brain of a listening horse analyzes all these components instantly and automatically. Cells in the horse’s inner ear encode the varied frequencies within each whinny; cells in the auditory cortex calculate the differences and mark the timing. The brain’s association areas apply meaning: “Oh, that’s Mirror. She’s worried about something.” We hear the whinny and, if we are observant, we notice the response. But all of the complicated neural work is hidden, so we assume the analysis is easy. Or magical. It’s not. There’s a lot going on inside your horse’s forehead.

In addition to gradations of emotion and meaning, each horse’s whinny is also unique—it’s a signature. Reno’s fearful whinny, for example, differs in its physical composition from Dee Sea’s fearful whinny. So, in addition to decoding what a whinny means, a listening horse also knows without sight who produced it. Knowing who’s sounding off provides even more information, because horses differ in their sensitivity just like humans do. The fearful whinny of a horse who’s generally laid back is a stronger warning than the fearful whinny of a horse who’s got the willies most of the time. Horses also cull information from a whinny even when they do not know the horse who produced it. From sound alone, they can identify an unfamiliar animal’s size, sex, and rank in the equine hierarchy. By contrast, humans can usually determine sex from the sound of a voice, but size is harder, and rank is not something we hear. After all, rank is less important to human survival than to equine survival.

Chances are that many species tap cross-modal perception. What’s remarkable is that we assumed they couldn’t. For the full effect of the equine brain’s ability to decode what it hears, remember that we have considered only the whinny. Horses must also take into account the meanings of their neighbors’ nickers, squeals, groans, blows, and snorts. Their brains must analyze all the acoustic variations within those vocalizations, sort out which sound belongs to which horse, and figure out what it means in the context of the particular horse who produced it. Throw horses in a new setting where they don’t know anybody, and all this becomes a cacophony of confusing noise. And we wonder why they’re upset by change!

This excerpt from Horse Brain, Human Brain by Janet Jones is reprinted with permission from Trafalgar Square Books (www.horseandriderbooks.com).