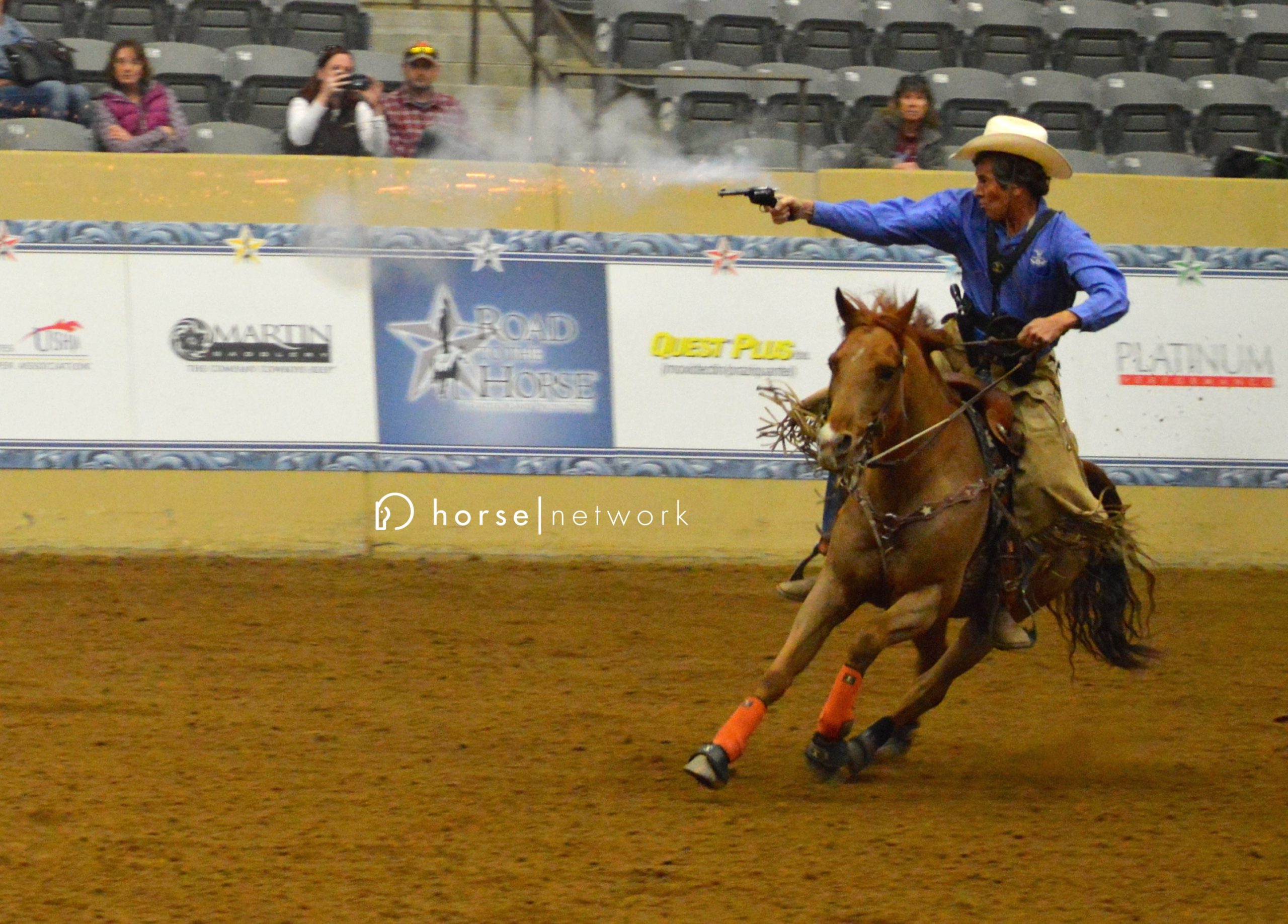 It all seemed so innocent at first. A dozen balloons tied to traffic cones scattered about the arena like an inviting carnival game. Suddenly, a gorgeous paint horse emerges from the gate carrying a neatly dressed cowboy. Within seconds the cowboy takes off at a gallop, his hat hitting the dirt. Then he reaches to his belt, pulls out a pistol and takes aim at his target…

The balloons disappear instantly in a flash of fire and a plume of gun smoke. They never even saw it coming. The horse and rider continue their sprint through the pattern, cocking and firing until the last balloon has vanished. In a matter of seconds their work is done, and they slowly exit into the sunset.

The balloons are quickly replaced and a new outlaw emerges.

The first thing you should know before going to a mounted shooting show—bring ear plugs. This might seem obvious to most, but then again, it is a horse show. Mounted shooting is a equestrian sport growing in popularity, as the Mounted Shooters of America All Star Team demonstrated during the 2016 Road to the Horse. The sport combines the speed and agility of barrel racing and adds guns. Real guns. Single action .45 revolvers, just like Wyatt Earp. There’s even a shotgun division. 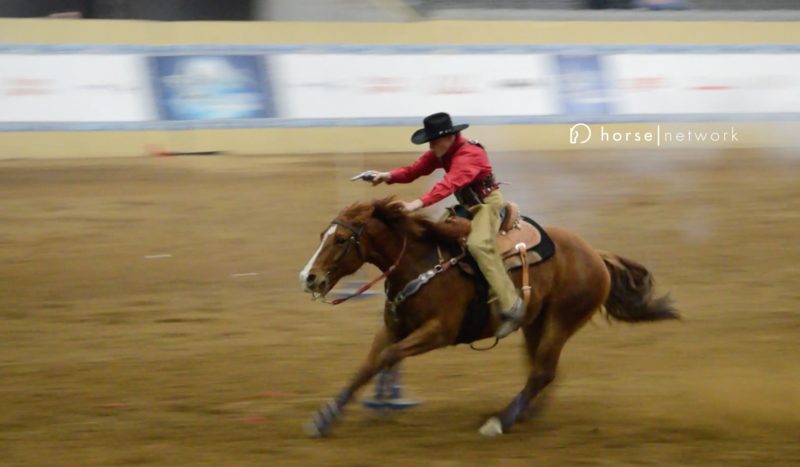 While the firearms are the real deal, the ammo is not. Each gun is loaded with gunpowder blanks, which offer enough force to pop a balloon from up to 15 feet away and plenty of noise to remind you this is not dressage. Once you get past the pop you can begin to fully appreciate the horsemanship and athleticism on display. Shooting a gun at a gallop is hard. Riding a tight pattern one-handed isn’t much easier. And then there’s the horses, who block out the noise and carry on dutifully.

Riders are scored on time and accuracy. A five second penalty is added for each missed target, and a ten second penalty is tacked on for running the course incorrectly. Fall off the horse and you’re looking at a full minute of penalty time.

You might think a sport like mounted shooting would attract a fairly homogenous crowd of horsemen, but that is far from the case. For one thing, the sport is equally popular among men and women, and not simply the red-blooded cowboy types.

Jim Wallace arrived at mounted shooting from the show world. Wallace and his wife Laura were mesmerized by a shooting demonstration while at a show about ten years ago, decided to give it a try and have been hooked ever since. “This is the most fun we’ve ever had,” he admitted.

Ricardo Patton is a relative newcomer on the scene, having been a NCAA Division I basketball coach for 26 years. He finds mounted shooting to be excellent therapy. “You kind of forget about everything else out here, and just go out and have fun.”

To compete at the top levels takes talent, time and of course, a good horse.

“Make sure you have a good neck reign before you start,” joked Wallace. “There’s a lot of one-handed riding. We do use ear plugs on our horses. You start them in a group of experienced horses and as herd animals, when they realize the others aren’t getting scared, they learn to relax. The big thing is just taking your time with them.” 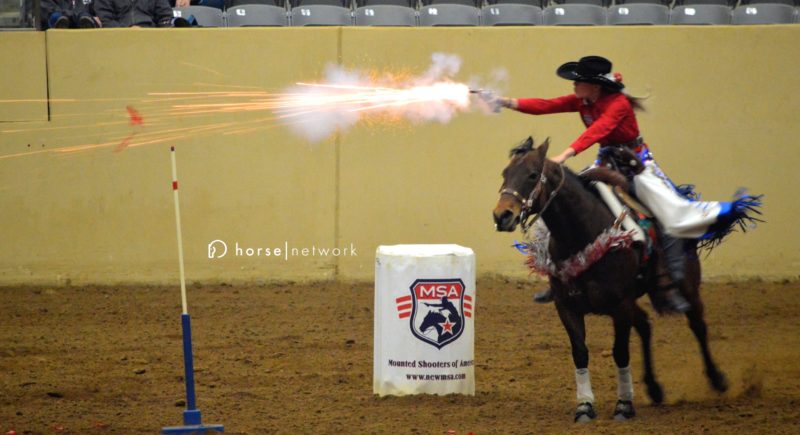 For more information on mounted shooting or how to get involved, check out newmsa.com. 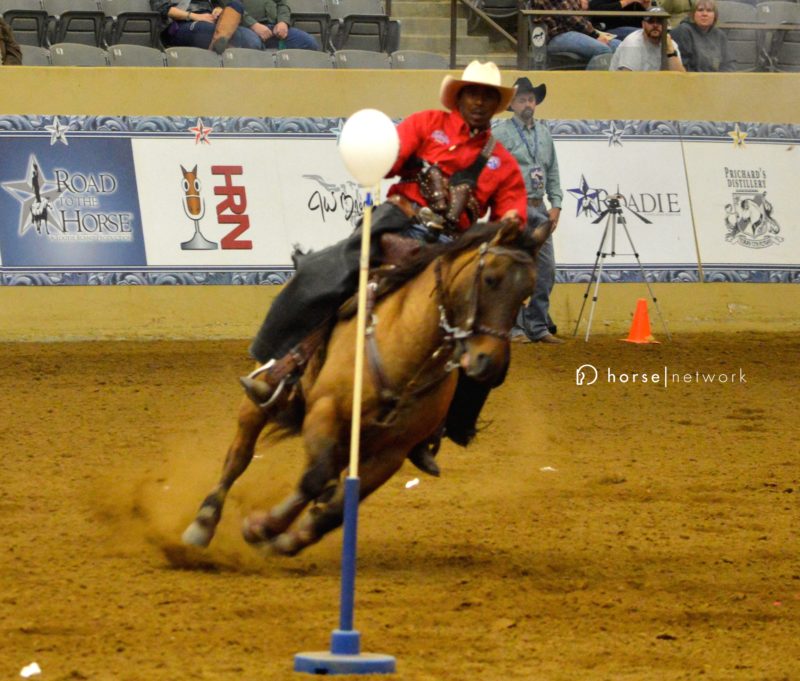 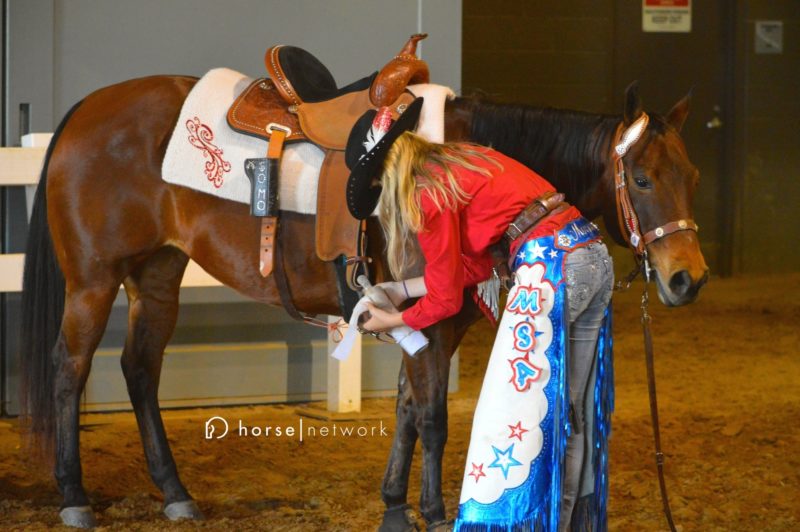